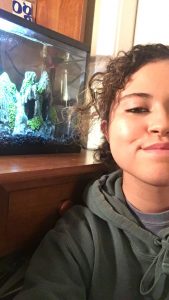 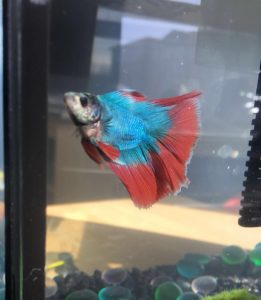 Unfortunately, I do not have any cats or dogs at home, so I had to take a selfie with my betta fish, Nicholas. I didn’t think I would ever be taking a picture with my fish tank! Since it is pretty hard to see Nicholas in this picture, I provided a second one where you are able to see him more closely. I first got Nicholas about 6 months ago with one of my roommates. We bought him at the Petco in Biddeford after our other fish passed. Since she will be studying abroad in the fall semester, he now lives with me! Nicholas is a male doubletail halfmoon betta fish. He has survived many trips back and forth from UNE, so he is a pretty hardy guy! He does not have any tank mates currently. Although, the tank does have two moss balls named Larry and Terry. In the past, he has had two panda cory fish living with him named Ben and Jerry. Unfortunately, they both mysteriously died a few months ago. Since he does not currently live with any friends, he has the whole tank to himself! In the future  I may try getting him some tetras or ghost shrimp since they make good tank mates as well.

60 thoughts on “Selfie With a Pet”

This work is licensed under a Creative Commons Attribution-ShareAlike 4.0 International License.